Articles by Sebastian A. Popa

Sebastian Adrian Popa is a Senior Lecturer in Comparative Politics at Newcastle University, a research fellow at MZES of the University of Mannheim and a core team member of the European Election Studies.

Liberal democracy is founded on two pillars: the electoral pillar based on citizen representation and the principle of majority rule, and the constitutional pillar that consists of institutional checks and balances to limit executive power and protect minorities. Ideally, there is a balance between the two pillars, but there is also an inherent tension between the principles of majority rule on the one hand, and the principle of checks and balances and protection of minority rights on the other. In our recent article in Politics we focus on support for liberal democracy among European citizens and particularly on the question whether such support is more widespread among those who support the EU than among Eurosceptics.

While the European Union (EU) has been criticized for its poorly developed electoral institutions, others have argued that its institutions perform well when they are evaluated against the principles of liberal democracy. These principles include institutional checks and balances on executive power, respect for the rule of law, human rights, and civil liberties. Since the European Union is seen to perform well in terms of the constitutional pillar of democracy, but weakly with regards to electoral representation of citizens, support for European integration can be expected to be associated with support for different models of democracy.

We studied the relationship between EU support and support for the principles of liberal democracy among citizens in the 28 EU member states, using data from the European Election Studies 2019. Our findings demonstrate that supporters of liberal principles of democracy tend to be more supportive of the EU, while supporters of more direct forms of citizen influence are more Eurosceptic.

We also find that attitudes towards liberal democracy are less structured than previous research suggests. Yet, the structuration of attitudes towards liberal democracy and the association between these attitudes and EU support is stronger in contexts where the role of the institutions of liberal democracy is more contested. Two examples are presented in the figure below. One item measures whether independent courts should be allowed to overrule the government. In contexts in which the independence of courts is respected, the item is unrelated to EU-support (at the right side of the horizontal axis). Yet in contexts in which the independence of courts is under attack (on the left side of the graph), this item is strongly related to EU-support. We find a similar pattern for an item on the independence of public television. It is unrelated to EU-support when there is no censorship of the media. Yet in countries where the government tries to censor the media, the issue is strongly related to EU-support. 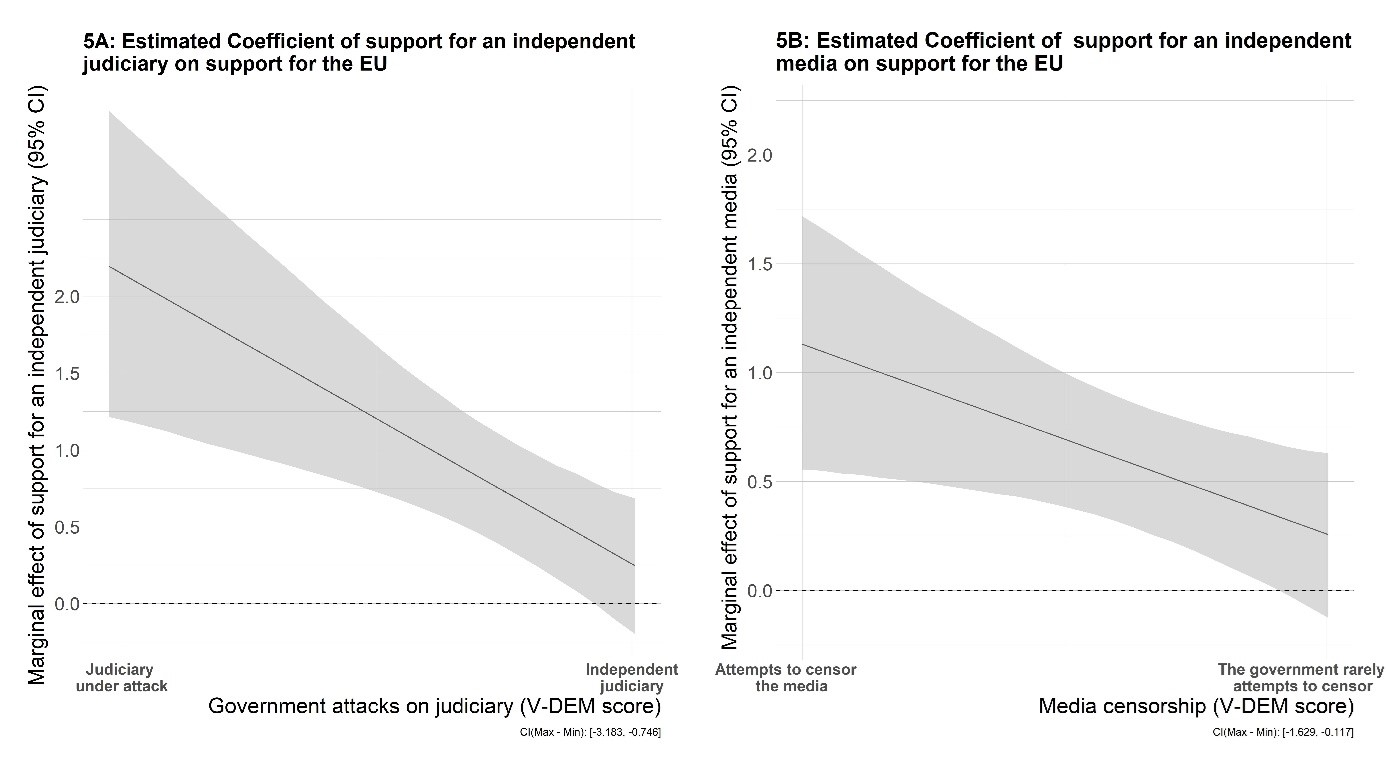 From a normative point of view, some may be worried about the consequences of the contestation of institutions that are designed to constrain the power of the executive. Yet, a more positive side effect might be that citizens do form more consistent attitudes on these matters. Given the fact that there is widespread support for EU membership also in countries where the institutions of liberal democracy are being challenged, the EU should feel confident to defend those institutions. At the very least, this is what the citizens in these countries would expect.