When election candidates and politicians address voters, they often face a choice in how they speak: they can be specific in what they propose, or they can be deliberately ambiguous. Gustav Meibauer looks at the trade-off between these two rhetorical strategies, and argues that many politicians – like Donald Trump – aim to get the best of both worlds by choosing to be hyper-specific but fact free.

Politicians of all ideologies face a strategic challenge in how they communicate with voters. Let’s assume, for simplicity’s sake – and discard the Electoral College for once – that all elected officials are interested in getting the most possible votes, and nothing else. Very generally, there are then two effective strategies for how they use speak and communicate (also known as rhetoric) they can use. One, is to be deliberately ambiguous in their communication, and two, to be precise and specific. The incentives behind both strategies are usually described as a trade-off, and as two opposites across a range of potential communication strategies.

The upsides and downsides of ambiguity

On one end of that range, ambiguous rhetoric avoids being “pinned down” to concrete promises or suggestions. Ambiguity is attractive during elections because candidates need to signal commitment to different voter groups at the same time to maximise their support. When it’s unclear which candidate voters prefer, as well as less important compared to other issues in the eyes of prospective voters, appealing to broad themes common across voter groups rather than making concrete proposals is preferable. On foreign policy, for example, voters may even reward such loose rhetoric where it appears bipartisan.

Ambiguous rhetoric is also harder to fact-check or disprove. Think about the type of words used in a Fourth-of-July speech. Such rhetoric is ceremonial, and more about presidential “sound” and stock phrases rather than any particular content. This lends itself better to some occasions and policy areas than others: for example, as many voters lack interest in and knowledge of foreign policy, some presidential candidates refrain almost entirely from engaging in detailed discussions about it. Politicians would then take specific positions only in specific forums, where special audiences demand them and where they are easily missed by the public.

However, overly ambiguous and evasive tactics may cause problems for those running for office. The speaker risks being pressed on vague rhetoric, especially in situations like televised debates or “townhalls”. Audiences may see through well-trodden verbiage because they are already familiar with the dynamics of elections. They may have learned how to be able to tell when a candidate is telling the truth or not, so will be able to identify when a candidate just tries to bullshit their way through. Voters may then prefer candidates to be more specific to reduce the uncertainty associated with vague positions.

On the other end of the range, therefore, a rhetorical strategy of specificity and precision can help mobilize specific voter groups. Perhaps more importantly, in electoral contexts, it may signal competence, leadership and tell voters something about a candidate’s “character”.

Specificity may well be aimed primarily at voter motivation and mobilization. Insofar as it speaks to the interests, ideas and themes important to some people (rather than others), it can shore up support in those that care deeply about the specific suggestion that is made. For example, a suggestion to cut foreign aid by 15 percent and instead invest the saved amount into the military speaks to a specific target audience. It could mobilize voters that care about the military (or do explicitly not care about foreign aid) in support of the candidate. By extension, however, it also mobilizes voters that care about foreign aid against the candidate. The speaker (and their advisers) must decide which voter group is larger, more likely to vote, and more likely to vote predominantly on their views on that specific suggestion (as opposed to all other suggestions also made). Politicians can get this estimation wrong in systematic ways. Wanting to hedge bets may lead them back to a strategy of ambiguity.

Importantly, rhetoric is aimed at convincing at least the important parts of the electorate of the candidate’s expertise, authority, character and suitability for the presidency. Specific knowledge and proposals show competence and expertise on a topic and make follow-up questions less likely. Being specific in complex political environments is hard, though, especially for less experienced or informed candidates 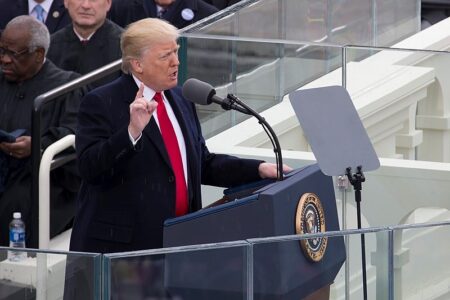 Why candidates and politicians are ambiguously specific

Being faced with either taking an ambiguous rhetorical stance or a more specific one can pose a dilemma for those running for office. Usually, candidates do not want to commit to either only one (which may alienate other audiences), or too obviously to multiple proposals, ideas and themes (which runs the risk of making contradictory statements). Instead, candidates can use overly specific suggestions to hide their ambiguity and their lack of real facts.

Bullshit is often understood, and even used colloquially as synonymous with, ambiguous or unclear statements. However, political rhetoric can also take on a hyper-specific nature, comparable to adverts that use made-up medicinal statistics to flog snake oil. This can persuade a trusting audience of the speaker’s evidence for their statements even though that evidence is not adequate to standards of truthful speaking: the speaker still produces bullshit. Donald Trump, usually prone to ambiguous rhetorical strategies, is a good example.

Again, this concerns the impression of what is said, rather than factual content. Hyper-specific bullshit helps sell the speaker’s competence because it sounds detailed, not because it actually is (Donald Trump’s insinuation that two medications can be used to treat COVID-19 is factually incorrect, as was pointed out by his own chief medical advisor immediately prior to his statements and tweets). In seeking to maximise potential voter shares, a politician (like Trump) may not primarily care whether their proposal actually solves the issue at hand; they are indifferent to truth (in opposition to the liar, who deeply cares about what they think is the truth). Their motivation lies in creating an impression of competent leadership during crisis.

The importance of such specific-yet-ambiguous concepts in political debates increases the more uncertain actors are about the consequences of different policies, and the more they perceive a need to appeal to a wide range of diverse voters. The latter point is particularly important for big-tent candidacies and parties, such as those run by most of the recent Democratic candidates, and presumably less so for narrower, mobilization-focused candidacies such as Trump’s in 2015/16. Uncertainty and complexity in the issue at hand makes it more likely for audiences to be ignorant or indifferent audiences. This makes it more likely that hyper-specific bullshit, i.e. trying to deceive audiences with only seemingly detailed proposals that hide their ambiguity and factual emptiness, is successful. In turn, this makes the continuous use of hyper-specific bullshit dangerous (although it may well be fun elsewhere). Especially in cases where uncertainty should be communicated clearly, and precision needs to correlate with actual expertise, speakers are incentivized to bullshit their way through.

The dangers of playing fast and loose with the truth

This dynamic has consequences that extend further than elections, most notably where hyper-specific proposals end up actually becoming policy. This may be because candidates feel bound by earlier promises, e.g. to avoid losing their audience from backing down or switching position, or because they feel that thinking of alternative options once in office is overly costly.

As I have suggested in a previous blog post, bullshitting may well be a rational strategy in response to contrasting incentives embedded in the electoral system. Looseness with truth and hyper-specificity can build up and endanger the credibility of the political process. Where successful, it legitimizes untruthfulness, erodes public debate, and is thus harmful to a functioning democracy.

Political and electoral dynamics that incentivize politicians to latch onto nonsensical proposals because they might appeal to potential voters are especially problematic where the institutionalised feedback mechanisms such as media coverage, audience backlash and electoral defeat, are not operating well enough. This seems to increasingly be the case in the hyper-partisan American political landscape. 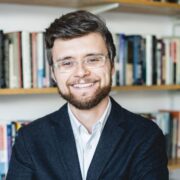 Gustav Meibauer is a Fellow in International Relations at the LSE. His research focuses on foreign policy decision-making.