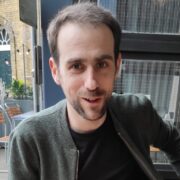 Benoit Dillet is a Lecturer in French Politics and Society at the University of Bath. His research focuses on the political theory of technology. His first monograph The Political Space of Art: The Dardenne Brothers, Arundhati Roy, Ai Weiwei and Burial (co-authored with Tara Puri) was published in 2016, and he is the author of numerous articles in Political Studies Review, Deleuze Studies, Parallax, and boundary 2.

With the Brexit political drama and the Trump presidency, analysts and journalists alike have accounted for a transformation of the common sense and the dealignment of the political landscape by focusing on the use of language, questioning the limits of acceptability and the effectiveness of rhetoric. In parallel to this shifting political reality, rhetorical analysis has been flourishing in political studies: for instance, studies have focused on the ritualistic character of speech moments in the British political calendar, on the use of anecdotes or on the use of melodrama in conflictual rhetoric. We now have useful tools to study changes in rhetorical culture, however what is often missing in this debate is the role of technology in transforming speeches. What does social media do to rhetoric?

In my recent article in Politics, I examine in detail the role played by social media platforms and their algorithms in the production and delivery of political speeches. Using the recent literature on critical algorithms studies, I develop a new approach in rhetorical political analysis. I demonstrate that by ignoring the means of communication, we continue to adopt an outdated conception of technology as a set of simple tools used by orators to get their ideas across. On the contrary, social media platforms and their algorithms condition our experience of political speeches as well as the design of speech situations. More specifically in my article, I break down this influence by turning to four conditionalities of algorithms on rhetoric:

In sum, I provide a new framework in rhetoric that integrates into it a technological analysis in the hope that it alerts us to the role of algorithms in speech interventions while contributing more widely to the growing debate on rhetoric and the media.