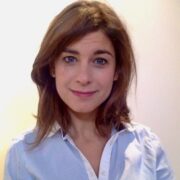 Emmanuelle Blanc completed her PhD in International Relations at the LSE under the supervision of Dr Federica Bicchi. Her dissertation explores the extensive use of political dialogues by the European Union in its external relations. Interdisciplinary in nature, her approach draws on socio-psychological insights to explore the needs and modes of communications characterizing the EU's interactions with arguably its most Significant Other, i.e. the United States.

During his 2016 election campaign and the presidential transition period, Donald Trump made no secret of his dislike for the European Union, NATO, and for transatlantic cooperation in general.  Emmanuelle Blanc writes that despite Trump’s rhetoric, dialogues between high-level US and EU officials have continued successfully. While this key diplomatic practice is often taken for granted, her analysis shows that they play a key role in reassuring both sides of the strength of their relationship in times of uncertainty.

This article is based on the paper,‘“We need to talk”: Trump’s electoral rhetoric and the role of transatlantic dialogues’. published in Politics, as part of the special issue ‘Elections, Rhetoric and American Foreign Policy in the Age of Donald Trump’ (10.1177/0263395720935376)

Autumn 2016. We likely all remember the sense of confusion, anxiety and uncertainty which prevailed in Europe during the last American Presidential campaign, and culminated with the victory of Donald Trump. This general sense of bewilderment was well-justified. During the 2016 election campaign, Donald Trump repeatedly attacked the EU, challenging the foundations of transatlantic relations in a way that no other US president had ever done – leaving the future of those relations more uncertain than ever.

This rhetoric put the entire transatlantic relationship at risk, including the intense channels of communication that had been institutionalized over the years. Since the signature of the Transatlantic declaration (TAD) at the beginning of the 1990s, EU-US dialogues – face to face meetings between high level officials – have become common, and now cover an ever-expanding range of issues (migration, non-proliferation issues, trade…) and involve diverse actors (lawmakers, diplomats, business groups …). As we usually expect that the foreign policy of the President elect will by and large follow its rhetoric, this impressive architecture of dialogue – a testament of the strength and vitality of the transatlantic relationship- seemed to be in jeopardy.

Yet since Trump’s election, rather than dwindling, these dialogues have gained in importance. Why is it the case? Why did transatlantic dialogues continue, in spite of the fierce presidential rhetoric on the transatlantic relationship suggesting otherwise? To find out, my research looked at the EU-US dialogues during the transition period following Trump’s election as the US President. I paid particular attention to the dynamics of meetings between diplomats, lawmakers in the framework of the Transatlantic Legislators’ Dialogue (TLD) and civil society dialogues. My analysis relied on textual, video and interview data with European and American representatives that took part in these dialogues.

While dialogues can be used for coercion, cooperation and persuasion, European and American representatives heavily relied upon these channels of communication to reassure each other of the continuity of their friendship in these uncertain times. As actors seeking security for the transatlantic relationship, they took advantage of these dialogues to tame the anxiety related to the leadership change in the US.

Elections can inject a great deal of uncertainty regarding the future of diplomatic relationships, potentially creating anxiety. In the lead up to and following Trump’s election, there was a large build-up of uncertainty, creating a diffuse sense of anxiety regarding the future of the EU-US relationship and the shared understandings underpinning it. Trump doubled down on his negative remarks on Europe’s future, including cheering on Brexit, stating that NATO is obsolete, and questioning the need for the European bloc all together. Never has an American President gone so far in their attacks – like calling the EU a ‘foe’ on trade. For many commentators, Trump’s tendency to openly challenge the international liberal order was not just a change of direction typical when a new president enters the White House, but a rejection of the whole American foreign policy tradition. By challenging key fundamentals of the transatlantic relationship, he endangered the mutual recognition of the friendship relationship that had been forged over time and that provided a sense of stability to both Europeans and Americans. 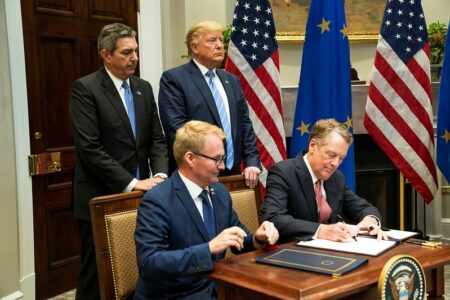 What made this electoral period anxiety-producing is the fact that the uncertainty normally accompanying elections has only amplified over time. As part of the transition, the first actions of a new President generally focus on establishing the administration’s priorities, thereby reducing the uncertainty surrounding its future policy. However, the Trump administration kept sending mixed signals, leading scholars to argue that ‘unpredictability’ has become the defining feature of the transatlantic relationship. For instance, while Trump lambasted the alliance as ‘obsolete’, and questioned the unconditional solidarity underpinning NATO, he increased military spending and deployed troops to Eastern Europe as agreed under the Obama administration, adding to the confusion on the European side.

In light of this acute uncertainty, both European and American actors needed reassurance that their friendship would endure in the future in spite of the scathing electoral rhetoric. And this is exactly what dialogues allowed them to do. These face-to-face interactions that had long been institutionalized allowed European and American representatives to cultivate a sense of continuity at a time in which crucial aspects of their social world were threatened.

Each dialogue provides a valuable opportunity to reinforce routines and appeal to a familiar narrative focused on the friendship forged between the EU and the US over recent decades. For instance, official documents following these meetings highlight the persisting commitment of both sides to a shared vision of the world and link common past achievements with the prospect of future endeavours to create a sense of continuity.

The very way the dialogue unfolds also reveals the continuation of a close friendship relationship among the participants. For example, in a meeting between the European Parliamentary delegation to the US and Anthony Gardner, former US Ambassador to the EU, one Member of the European Parliament bluntly asked: ‘How do you think that the Europeans can improve their image in the US to be better appreciated by the new administration?’ To this question, Gardner answered: ‘To counter the bilateral transactional basis that the Trump administration is likely to take, you need to prove that the EU is capable of delivering. You need to couch your arguments in terms of what EU-US relations can do for the US. This is the language that resonates. Talk less about values and more about how it makes sense in terms of US interests if you want to convince them’. This exchange is just one example among many which show the closeness between European and American participants and embody the friendly practice of providing counsel to each other.

Not completely business as usual

Despite this continuity, we found several changes in the quality and quantity of dialogues conducted at this critical period. Content-wise, due to Trump’s improvised and explosive way of communication, more time was dedicated to clarifying the president’s intentions instead of focusing on substantial issues of cooperation, leading to high levels of frustration on the European side. In addition, a sense of urgency also prompted a variety of actors to build new bridges and consolidate ties over the Atlantic. Especially interesting is the reinforcement of direct ties between US cities and states with Europe, bypassing the Trump-era White House altogether. According to California Governor Jerry Brown, who was received at the European Parliament, ‘contacts between US states and other countries can be helpful and important, because you have to keep talking. This business of yelling at each other across the ocean is not good’.

That Trump’s aggressive rhetoric did not easily translate into foreign policy outcomes suggests that there are still strong mechanisms which limit the impact of the president’s biting rhetoric on the shape of US foreign policy. While institutionalized dialogues under the new administration continue, there are many who actively seek to preserve the friendship relationship through the practice of dialogue.