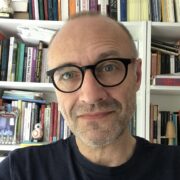 James Martin is Professor of Political Theory at Goldsmiths, University of London. His research includes studies on political rhetoric and Continental political theory. His most recent book is Psychopolitics of Speech: Uncivil Discourse and the Excess of Desire. Bielefeld: transcript Verlag, 2019.

Although we frequently hear the complaint that politics is ‘all talk’, at the right moment speaking effectively can be a powerful resource. Steadying nerves, offering reassurance, provoking questions or disrupting consensus may, in specific contexts, make an enormous difference.

In my recent article in Politics I argue rhetorical enquiry helps us understand speech as an intervention in time. Rhetoric originated as the ancient art of speech and persuasion, a practical knowledge based on the observation of how people spoke in assemblies, ceremonies, and law courts. There are now many ways to explore political ‘discourse’ and ‘ideology’ and, often, rhetorical insights are integrated within these more general approaches. But rhetoric itself focuses in detail on argumentative strategies and linguistic manoeuvres. Attention is given to how speech intervenes in the situations from which they arise. To explore rhetoric nowadays is to be attuned to how public speech of various kinds – from formal speeches and brief remarks, to writing, texts, Tweets, and even imagery – actively figures the meaning of events, problems or circumstances and defines stances towards them.

This effort to create meaning is what I call the ‘hermeneutics of public speech’. Hermeneutics is a theory of interpretation, although it is not usually applied to the study of political speech and argument. Yet, in everyday public discourse as well as at moments of heightened tension or crisis, actors speak in order to steer events, open up opportunities and close down others. President Trump’s infamous Tweets or rally speeches, for instance, are perpetually directed at monopolising or distracting public attention by provoking his opponents. Likewise, Greta Thunberg’s exhortations concerning the failure of institutions to tackle climate change with sufficient urgency creates pressure by strategically mobilising disappointment.

But how does hermeneutics relate speech to time? I argue, with the help of philosophers John Caputo and Jacques Derrida, that rhetoric illuminates the temporal character of speech: meaning is made both in response to a specific moment and to what Derrida called the ‘coming of the other’, that is, the sheer uncertainty of the future. All politicians tackle situations with degrees of deliberate calculation – rhetorical analysis frequently clarifies the opportunism revealed in language choice (for instance, in order to build or sustain coalitions). But, inevitably, speakers seek to shape time by gesturing beyond immediate conditions to a future that is intrinsically incalculable – for example, by using images of social harmony, reconciliation or, conversely, warnings of impending disaster. This otherness of the future refers not simply to an actual, concrete circumstance that may be realised but, rather, a sense of ‘promise’ that invites degrees of ethical openness to what comes.

A rhetorical analysis attentive to hermeneutics, I claim, alerts us to the balance struck in public speech between calculation and promise. It underscores how, though often disparaged as empty, political talk is a quite particular – sometimes ‘risky’ – activity that always involves negotiating the demands of the present with our responsibility to the future.