Do voters use information on parties’ legislative work at EU level when voting in European Parliament (EP) elections? Exactly like in the workplace – where employers monitor the concrete performance of employees – it is crucial that voters keep tabs on the performance of political parties and use that information come election time (retrospective voting). Retrospective voting is considered an optimal strategy, but it is cognitively demanding and prone to biases. For this reason, Ferejohn suggested that monitoring ‘valence’ performance indicators – such as attendance to legislative plenary sessions – is a more convenient shortcut that enables voters to keep tabs on representative effectively.

Other than the inherent difficulties of retrospective voting, EP elections make it even harder: these elections have displayed features of ‘barometer’ or ‘second-order’ elections, and because of that scholars expect it to be even more difficult for voters to monitor what political parties concretely do when serving in the EP, and to use that information when they cast their vote in EP elections. But were things different in 2019, in an era where the politicisation of the EU is at its height?

In my recent article in Politics, I use retrospective data on political parties’ legislative activities of the previous EP term (2014-2019) – web-scraped from the EP official website – to test whether parties with higher plenary attendance, number of speeches delivered, and number of members filling rapporteurships and committee chairmanship positions are rewarded by voters in the 2019 elections. Vote choice data for the 2019 EP elections was retrieved from the European Election Study 2019.

I find that, controlling for ideological congruence and other relevant party characteristics, voters do reward political parties that were more active in the previous EP legislative term, especially as it pertains plenary attendance, a clear valence activity that unambiguously signals hard-work. Parties that gave a lot of speeches, were, instead penalised – possibly the result of speeches being seeing as theatrical, ‘show-horse’ activities, with less immediate links to policy work. 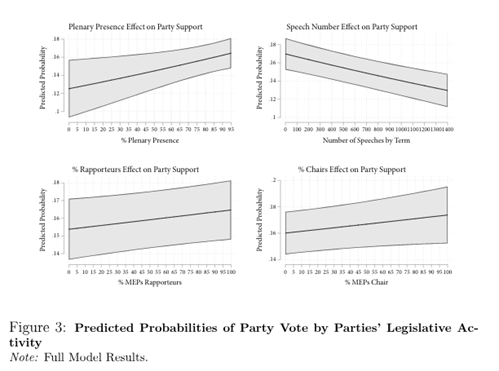 To fully believe these findings, the mechanism – i.e. that voters are aware of political parties’ legislative records – needed to be probed further. To do that, I leveraged the different electoral rules used by the various Member States in the 2019 European elections, as well as the EES 2019 survey question “how closely did you follow the campaign ahead of the European Parliament elections?”. Information about legislative records, in fact, is more likely to get out in electoral systems that encourage the personal vote – e.g. systems with open ballots or, alternatively, systems with small district magnitudes. The system which leads to the highest personal vote incentives is the open list with large district magnitudes, while a closed-list system with large district magnitudes depresses the personal vote most.

I find that the higher the personal vote incentive in a Member State, the more parties’ legislative productivity (in work-horse activities) is electorally beneficial, and especially so in the sample of voters that were paying attention to the EP election campaign.

There is sound evidence that high levels of activity in the previous EP term – especially of the ‘work-horse’ type – give an electoral advantage to national parties. And that, therefore, the normative requirement of retrospective voting can be a feature of multi-level, supranational contexts as well. 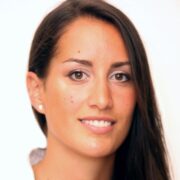 Dr. Miriam Sorace is a lecturer (assistant professor) in quantitative politics at the University of Kent and a visiting fellow in European politics at the London School of Economics and Political Science. She specialises in political representation, motivated reasoning and information processing, democratic attitudes, EU politics and supranational democracy and in gendered political behaviour.