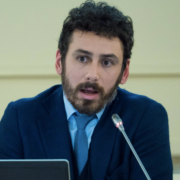 Lorenzo Cicchi (PhD, IMT Institute for Advanced Studies, 2013) is a research associate at the Robert Schuman Centre for Advanced Studies of the European University Institute, where he coordinates the activities of the European Governance and Politics Programme (EGGP). He is also an adjunct professor at California State University in Florence and a teaching assistant at the Department of Political Science of the University of Pisa. Previously, he was coordinator of the Observatory on Political Parties and Representation (OPPR) and post-doctoral research fellow at Fondazione Luigi Einaudi in Rome. His research focuses on political parties, elections, and EU politics and institutions, in particular the European Parliament where he worked as parliamentary assistant. He published the book Is Euro-voting Truly Supranational? National Affiliation and Political Group Membership in European Parliament (Pisa University Press, 2016) and his articles appear, among others, on Journal of Modern Italian Studies, Defence Studies, and Interdisciplinary Political Studies.

A range of academic literature (for instance here, here, here, and here) has investigated the importance of games, simulations, and alternative teaching methods in the international relations (IR) field. Among many role-playing experiences, the Model United Nations (MUN) is and one of the most popular IR simulations around the world.

In a recent article in Politics we examine how students have modified their own views, interpretations and expectations after participating in the MUN. This article, based on a survey of students (N=218) participating in two MUNs held in Spring 2018, answers the following research questions: How is the MUN perceived as an experience that helps improve personal skills (such as language ability, negotiation skills, and knowledge)? How and to what extent do perceptions vary on selected IR issues before and after the MUN? How and to what extent do views on future university enrolment or future work and career vary before and after the MUN? By answering these questions, we make three innovative contributions to the current scholarly debate.

First, we analyse the evolution of students’ perceived skills before and after the simulation, confirming – thanks to a sample larger than the vast majority of studies in the field – that students consider the MUN experience as ‘increasing’ their personal skills. In this way, the manuscript aims at addressing one of the shortcomings acknowledged in the literature (here and here): the lack of empirical studies on simulations based on large samples.

Second, we investigate students’ perspectives on selected IR issues (such as conflict and cooperation), corroborating the findings of the very few studies (here and here) that have stressed a (counter-intuitive) ‘reality check effect’ of simulations in tempering the idealism of participants. In fact, students tend to conceive conflict in IR as more salient than they had thought it was before the MUNs—and, vice versa, they see cooperation in IR as less important than they had assumed it to be beforehand. Students consider International Organisations (IOs), cooperation, and diplomacy in IR to be highly relevant, but this perceived importance decreases after the MUN. Students who attend MUNs tend to view IOs with less idealism, according them importance but not as much as before the experience.

Third, we focus on another underestimated issue in the literature on IR and role-playing: how student’s viewpoints on future university enrolment or career vary after the simulation. Our analysis reveals that, after the MUN, students are less doubtful about their future university and career aspirations, and more willing to enrol in curricula that are consistent with an international orientation. In other words, their perspectives on future careers become less uncertain and more oriented towards curricula that are somehow related to the world of IR.

Finally, the variance of students’ sample, which is differentiated by age, level of education (high school or university, MA, BA, years of enrolment, etc.), gender, and the kind of MUN attended, allows us to employ a OLS multivariate regression analysis. All in all, the empirical findings of the research underscore the conclusion that simulations are a valid and enriching experience for both high school and university students.

Further research could try to confirm and generalise our findings with even larger samples, especially concerning our preliminary analysis of the influence of simulations on student’s views about future studies and career. For instance, a cross-national comparative study might confront different national samples emphasising recurrent patterns, regularities and differences, and their main drivers. Further studies could test our hypotheses through an experimental design, i.e., submitting the same survey to students not participating in a simulation and learning through seminars and reading only. Finally, a more detailed gender-based approach could also represent a fruitful avenue for further research.